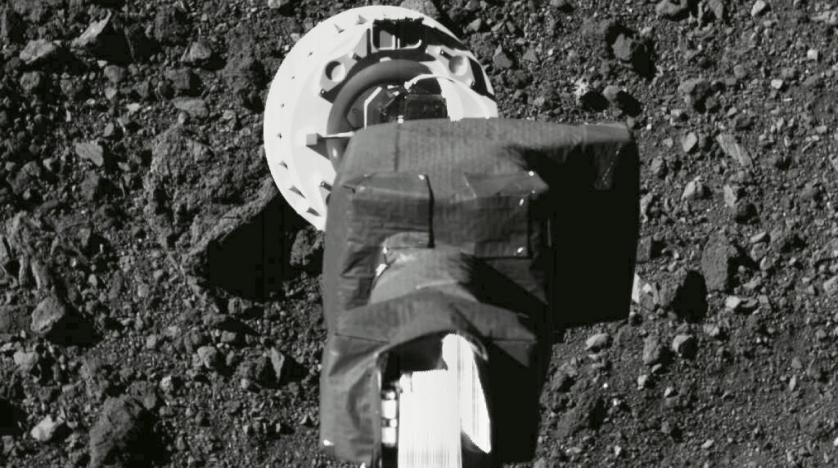 The robotic arm of the probe, OSIRIS-REx, on Tuesday night kicked up a debris cloud of rocks on Bennu, a skyscraper-sized asteroid some 200 million miles (320 million km) from Earth and trapped the material in a collection device for the return to Earth.
But images of the spacecraft’s collection head beamed back to ground control revealed it had caught more material than scientists anticipated and was spewing an excess of flaky asteroid rocks into space.
The leakage had the OSIRIS-REx mission team scrambling to stow the collection device to prevent additional spillage.”Time is of the essence,” Thomas Zurbuchen, NASA’s associate administrator for science, told reporters. Zurbuchen said mission teams will skip their chance to measure how much material they collected as originally planned and proceed to the stow phase, a fragile process of tucking the sample collection container in a safe position within the spacecraft without jostling out more valuable material.NASA will not know how much material it collected until the sample capsule returns in 2023. The troubleshooting also led mission leaders to forgo any more chances of redoing a collection attempt and instead commit to begin the spacecraft’s return to Earth next March. “Quite honestly, we could not have performed a better collection experiment,” OSIRIS-REx principle investigator Dante Lauretta told reporters, affirming a hearty sample size.
But with the door lodged open by a rock and the “concerning” images of sample spillage, “we’re almost the victim of our own success here,” he added. The roughly $800 million, minivan-sized OSIRIS-REx spacecraft, built by Lockheed Martin, launched in 2016 to grab and return the first U.S. sample of pristine asteroid materials. Japan is the only other country to have accomplished such a feat.Asteroids are among the leftover debris from the solar system’s formation some 4.5 billion years ago. A sample could hold clues to the origins of life on Earth, scientists say.

Got any signal up here? Nokia to build mobile network on the moon

Man from North Carolina won $1 million on a $10 scratch